More than 80 vehicles were stopped by police in Thetford on Tuesday (10 May 2022) as part of a multi-agency operation to reduce road casualties and disrupt criminality.

As part of the action day a number of vehicles were escorted onto a designated check site at the Forest Retail Park on London Road.

A total of 85 vehicles were stopped throughout the day, including cars, light goods vehicles and heavy goods vehicles. 11 drivers left the check site having committed no offences.

54 offences were recorded, and 49 Traffic Offence Reports (TORs) were issued, some drivers having committed more than one offence. The remaining 20 offences were dealt with via partner agencies.

Drivers were dealt with for the following:

A number of vehicles were immediately prohibited from use on the road due to the defects found.

Sergeant Ade Hales from the Joint Roads Armed Policing said: “Once again, we have proven just how important these action days are in making the roads of Norfolk a safer place.

“It is disappointing to see such a large amount of construction and use offences. There is significant risk to public due to drivers not securing their loads properly as they can often shift and cause injury to other road users. Having more than the required weight on your vehicle will increase your stopping distance. This unpredictability means drivers are less able to react to sudden hazards, which could cause serious or even fatal collisions.

"Similarly, the amount of people who were stopped for not wearing a seat belt is staggering. This is such a basic safety measure, that takes less than a minute to action and could potentially save your life.

“We will continue to reiterate our stance around the fatal 4 offences which include drink/drug driving, not wearing a seat belt, using a mobile phone and speeding. These offences make you four times more likely to be involved in a serious or fatal collision.

“Working alongside our partner agencies in order to crack down on road related offences is something we target all year round, however these actions days send a clear message to offenders that they could be stopped at any point and will face punishment.”

Norfolk Police and Crime Commissioner, Giles Orpen-Smellie said: “Time and again people tell me that road safety and concerns about drivers who put others at risk is a real worry for them. Keeping our communities safe is a key priority in my Police, Crime and Community Safety Plan and that includes work to keep roads and road users safe.

“In an ideal world these kinds of operations would not be necessary, but the outcomes here show that sadly there are still offences taking place that put drivers and other road users at risk, and whilst that is the case I will continue to give the constabulary my support in carrying out this work.”

The TORs issued as part of this initiative, could result in fines and/or points on drivers’ licences. Anyone with existing points on their licence risks losing it completely. 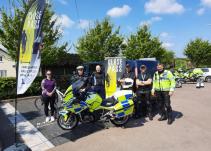