The story of Peter Garland

The families of a former Norfolk Chief Constable and a Second World War German soldier were reunited at an emotional ceremony on Saturday 13 July.

Peter Garland QPM was the Chief Constable of Norfolk Constabulary from 1965 until 1974.

Peter had joined the Metropolitan Police in the mid 1930’s and during his training was awarded the Batten of Honour for being the top student at Hendon training college. He served as a police officer until the Second World War when he joined the Royal Air Force where he served as a navigator and bomb aimer in Halifax bombers.

Having flown his allocated 26 missions, he was put on a ‘reserve’ list and was used to train younger airmen. However, on 21st January 1944 crew were short of a navigator and Peter flew over Germany again.

The Halifax began its bombing run over Magdeburg, with Peter lying in the glass bubble in the front of the Halifax preparing to drop bombs, when it was attacked by a German fighter and the plane exploded. Peter found himself falling to earth still trapped in the perspex nose cone. He pulled his parachute rip-cord but he was far too close to the ground and as the parachute began to deploy he hit the ground, landing in a mud patch, still attached to part of the nose cone. Mr Peter was serious injured – and about 150 metres away his aircraft crashed killing the other crew members on board.

Peter’s problems were only just beginning. The local population had begun to gather around him with improvised weapons with the intention of killing him as they had been instructed to do by the German High Command.

Peter was unable to defend himself but a young German soldier called Gerard Fricke stepped forward and armed with his gun, he held the local people at bay until an ambulance arrived.

As Peter was being put into the ambulance he gave the young soldier the only two things he had in his pocket as a gift – two pence and a screwdriver with the name ‘Garland’ engraved into the wooden handle.

Peter was taken to hospital where he was well treated before being sent to the Stalag-luft 3 prisoner of war camp. He arrived just as preparations were being made for the infamous ‘Great Escape’ in which Peter was actively involved as a ‘gardener’. This involved him walking about the camp gently dropping soil dug from the tunnel out of socks in his trouser legs onto the ground and gradually kicking it around until it was all gone.

When the tunnel was finished and names were pulled out of a hat to decide who would escape, Peter’s name was not drawn out. Of the 76 men who escaped, 50 of them were later shot by the Gestapo as an example to other prisoners.

Later, as the Russian Army approached the camp, Peter, along with all the other prisoners, were marched westwards in what became known as the ‘death march’ – where prisoners from all over Germany were marched for hundreds of miles in the worst winter and blizzards in 100 years with insufficient clothes, insufficient food, no medical facilities and anyone not able to keep up was shot. Eventually the German guards disappeared and the prisoners were able to make contact with the Allies and sent home.

When he returned to England Peter joined the Metropolitan Police and worked his way up the ranks until becoming Chief Constable of Norfolk Police in 1965.

In the meantime, the young German soldier, Gerard Fricke, went back to civilian life and if the confusion in Germany at the time, found that he was stuck in East Germany and he was not happy about it. After a number of years he managed to escape to West Germany, bringing with him only a few important belongings – including the engraved screwdriver given to him by Peter.

45 years later a lady called Mrs Carver was in Germany on holiday and happened to meet Herr Fricke. They discussed the UK and he showed her the screwdriver asking if she knew Mr Garland as he wished to meet him again.

In a twist of fate Mrs Carver happened to come from Norfolk and on her return home checked the telephone directory, found the name Garland and called asking if It was the same Mr Garland who had fallen out of an airplane. When Peter confirmed he had she passed on Herr Frick’s details and the two men met up in Norfolk.

During Norfolk Constabulary’s Remembrance Day service in 2018, Cedric Smith, a member of the Force Historians, told Peter Garland’s story. It emerged it had never been heard before and with the support of the current Chief Constable, Cedric undertook the mammoth task of trying to trace the family of the German soldier in the hope of finding the screwdriver. Cedric’s commitment paid off and he traced the nephew of Herr Frick, Gerhard Grebbin, who still had the screwdriver in his possession.

Gerhard Grebbin, aged 77, travelled from Germany to present the screwdriver to Norfolk Police at a special ceremony attended by both families on Saturday 13 July.

During the event Gerhard said: “It was courage and it was humanity. It was really impressive what a young man of 25 years did for another person who just fell out of the sky. Peter was 31 and my uncle was 25 when they met for the first time in the war. They were over 70 when they met later on and it was a very emotional reunion then.

“I think we can all learn something from them. That courage and empathy are values that share importance for even the young generation. We can be very happy that we have more than 75 years of peace in Western Europe and we should do everything that it remains so. I leave this screwdriver to you as my gift.”

Thanking Mr Grebbin Chief Constable Simon Bailey said: "The story of your uncle, and of Peter Garland, will live on and we will make sure that generations of police officers that join Norfolk Constabulary will always become familiar with that amazing story, and the importance of empathy and courage." 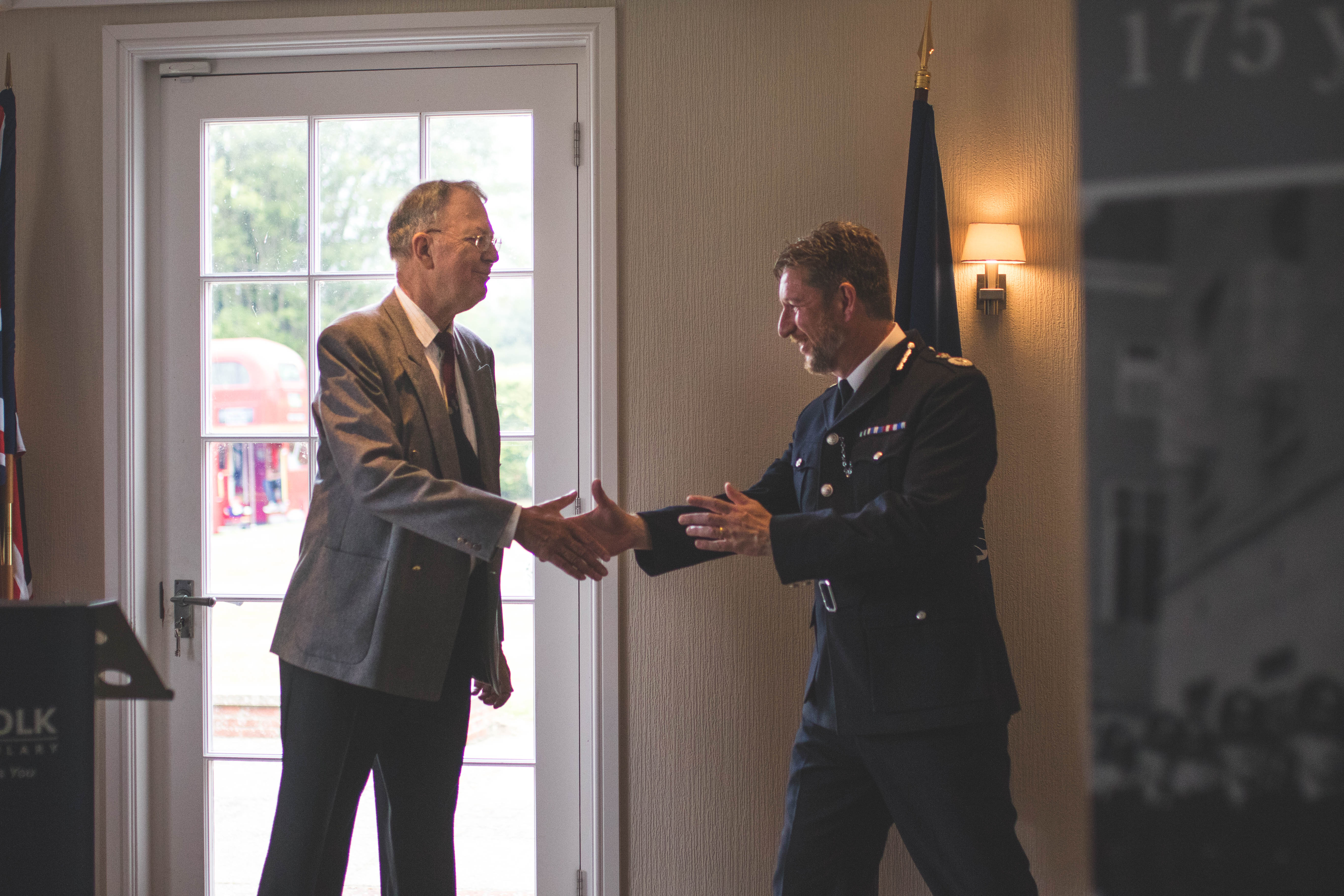