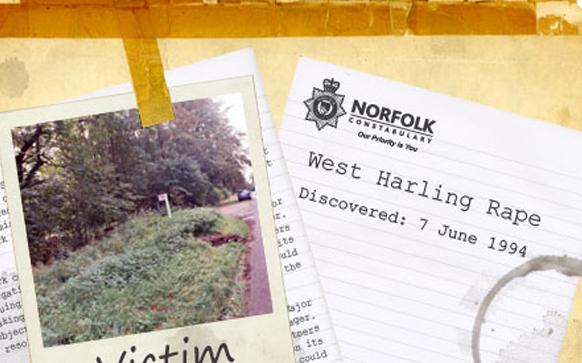 At about 12.20pm on Tuesday 7 June 1994, a brutal sexual attack took place on a 71 year old woman in woodland known as West Harling heath close to the village of East Harling in Norfolk.

The victim had been walking her little white highland terrier in a well known area called 'The Gallops’. As she was returning to her car, parked at the entrance of Fire Ride 79 by the local road, a young man approached her. He then carried out a vicious sex attack on her which left her badly bruised and beaten, he also attacked her dog before leaving the scene.

That particular day was warm and sunny and a number of people came forward to help the police to try and identify the attacker.

The attacker was described as aged around 16, 5’6” to 7” tall and of medium build with dark brown hair that was distinctive and described then as having a ‘mop-head’ style (shaved sides with straggly hair on top). He was seen riding about the area prior to the attack on a dark coloured mountain bike.

Despite a major investigation and a local campaign of eliminating young men fitting the profile of the attacker forensically, the attacker was never identified.

Since 1994 a number of reviews have been conducted to identify the attacker by the use of DNA but it remains, to this day, an unsolved case.

Work has been carried out using DNA techniques including familial DNA process. This has not identified the offender to this horrific attack. Subject to any further DNA breakthroughs the case will be subject of review and despite the time elapsed we will continue to seek any new information that helps solve this crime.

We continue to appeal for any information that people have on this case. It is possible that people did not contact the investigation in the preceding years due to loyalties that have  since changed.